BEH 24/7: How did your recruitment breakdown?

Levell: My recruitment didn’t really take off until I went to Five-Star camp, I think the first session in July and was named the best point guard in the camp and also MVP. Then I went to the August session that had all the best players from NYC, Baltimore and basically the whole East Coast. I was named to the All-Star team so then I started getting recruited from a lot of different schools. My last three schools were Rhode Island, Seton Hall and Syracuse. I chose Seton Hall because it was close to home and my friends and family would see me play often and also because PJ Carlesimo was the coach. Everybody was wondering if I would be able to play for him because he was pretty intense. But I played under Gil Reynolds who was probably the best teacher of basketball I ever encountered but he was also really intense so for me I wasn’t worried. I remember PJ coming to Brooklyn for me to sign and everybody from my block (Prospect Place between Buffalo and Ralph) were outside to see him. He came in a big blue Cadillac ha-ha So SHU won out and I’m happy I made that decision.

BEH 24/7: What is your favorite moment from your playing days at Seton Hall?

Levell: I would have to say it was my first official college game. We were playing in a tournament in Hawaii! I remember my first game I was nervous but as soon as Coach Blaney put me in the game I was fine. I settled down and had a pretty good game. I think I scored nine points but missed five of ten free throws. Also, I remember beating Syracuse my freshman year when they had Lawrence Moten and the fans at the Meadowlands stormed the court! That was the only experience I had in college with the fans storming the court so that was pretty cool. 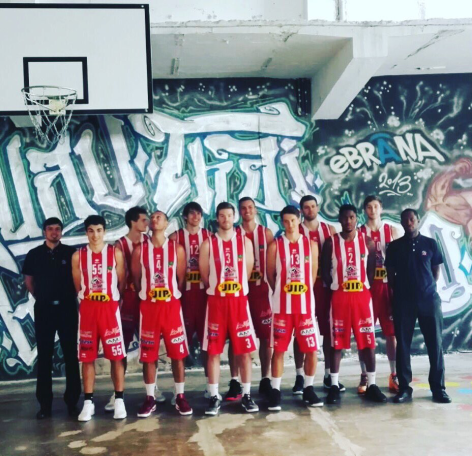 BEH 24/7: What have you been up to since your playing days in the Big East?

Levell: Well I graduated in ‘98. The NBA had a lockout so my agent at the time Andy Miller asked if I wanted to stay and wait or if I wanted to go overseas to make some money. I was supposed to go to camp with the New Jersey Nets, of course now Brooklyn Nets! So, I decided to head overseas to play in the Czech Republic where I am coaching now. But I played there two years, then played five weeks in Belgium, then finished the season in Poland. After Poland 9/11 happened so I took a year off, worked as a dispatcher for Securitas, one of the biggest security companies in the world. Then a coach that I played for in the Czech Republic emailed me if I wanted to play again. Because I missed playing I deciding to play and I’ve been in the Czech Republic ever since. Of course, I come home during the summer but for the last 15 years in a row I’ve been in Czech. I played until 40, then on my 40th birthday on national TV in Czech I tore the rotator cuff in my right shoulder. While I was rehabbing, the coach resigned. The GM calls me at 9pm to come to the office so I knew something was wrong. So, I was offered the job and immediately I accepted and that was January, 2016. I drove home with so much on my mind! I was in shock that this was happening! I immediately called coach Amaker to ask his advice. He told me you are good enough, you know the game, don’t second guess yourself and the last thing was something HOF coach Larry Brown had told him and that’s “teach only what you know” I think we were in 5th or 6th place when I took over. We won the Czech Cup for the first time in 22 years and we finished the season with the bronze medal. This past season was my first full season. We competed in the FIBA Europe Cup which we advanced past the first round and were one game from making it to the playoff round. We finished our domestic league with the bronze after finishing the regular season 2nd and the best record in the last 10 years. So, in my 2nd full season we are looking to improve!  I also wrote a book called “A Guide to Playing Professional Basketball Overseas” I wrote it because playing in Czech so long, all the new players that came to Czech would reach out to me for advice so I thought the book would be helpful for them and anyone else that wanted to know what it’s like playing overseas.

BEH 24/7: Who were the top five guys you had to guard in your Big East days?

Levell: It’s funny because I always had the assignment of guarding the other team’s best perimeter player ha-ha. So, I’ve seen my share of good ballers in the Big East!  #1 was Allen Iverson. He had the ability and freedom to take any shot he wanted, plus his combination of speed and athleticism was off the charts. I remember he scored 40 against us and my teammate Danny Hurley was walking out of the arena saying God is not fair for giving him so much talent ha-ha. Every time I see Danny the first thing he says is I will never forgive you for picking up two early fouls and me having to guard Iverson ha-ha. #2 Ray Allen.  His size and ability to shoot was hard to guard. I remember playing at the Meadowlands and they were ranked I think fourth in the country. I walk out and he is shooting with a manager, NBA threes off the back-board yelling, “come to my bank” ha-ha. Of course, he finished with I think 34 or 36 ha-ha. #3 Kerry Kittles. He was constant motion. He never stopped moving. He also had good size and could really shoot. He had those bigs setting them staggered screens for him so you had to really work guarding him. #4 Richard Hamilton, again another guard who was always on the move. He could shoot it and had the ability to put it on the floor and had good size. #5 was a guy I had to guard for two years in practice every day and that’s Shaheen Holloway. He was an excellent ball handler. He knew how to change speed and direction so well. It was really hard staying in front of him and going up against him in practice really gave me confidence that I could guard anybody.

BEH 24/7: Are you able to appreciate all of your accomplishments looking back after all of these years?

Levell: I don’t really think about the accomplishments because I don’t have time. Being a Head Coach takes up a lot of time because you are in charge of running a program! There are so many things to worry about not just on the court but also off the court. Also, I’m new to coaching so I’m always trying to learn by reading and watching videos from people I respect, not just coaches. I like to read about the journey and what they’ve been through. Eventually when I’m retired I will be able to look back at everything and appreciate it all! But no time right now ha-ha.

BEH 24/7: Who was the most influential person that got you where you are today?

Levell: There are many people that helped me along the way but the most influential I would say was my grandmother Cynthia Caddle who just recently passed. When I was living in Brooklyn along with my other siblings (seven of us four boys including me and three girls). When things were not looking good she took us in and provided us a safe and loving environment!  So, without her I’m definitely not in the position I’m in today. So, she is that person that has to be the most influential person that got me to where I am today!

BEH 24/7: Do you keep in contact with any former teammates or guys you competed against?

Levell: Yes, I keep in contact with some of my teammates, and because of social media it’s a lot easier in these times. The teammate I’m most in contact with is Shaheen Holloway. When I come home during the summer we usually meet up for dinner or something. I know his wife because she went to SHU also. Shaheen is from NYC like me, so I think the bond was there from the beginning. But being overseas, I speak with Rimas Kaukenas also. I used to be more in contact with Adrian Griffin but I’m sure he is busy. I went to visit Danny Hurley at Rhode Island a couple years ago, Sean Codey was a walk on at SHU and we speak often by phone. He even had some business in Prague and we met for dinner. The good thing is when I do speak with any of these guys even if it’s after a couple months or years of not speaking we pick right up like we speak every day! It’s the SHU bond!

BEH 24/7: Explain if you could, how much it meant to be a local kid and play at MSG in the Big East Tournament?

Levell: Playing in the Big Tournament was a dream come true! Watching it for many years on TV and then actually going to the media day for the first time, I was overwhelmed. I still have my media guide from the first Big East Tournament. Playing in the Garden was special. As a kid and even to this day the Knicks is still my team. I had been to the Garden many times to watch the Knicks play but never thought I would have an opportunity to play on the court. I remember walking out for shoot-around looking at the floor and the banners it was an unbelievable feeling! A kid from Brooklyn.  MSG was so close but also so far, so I thought to myself “I’m here now”.

Our thanks to Levell for taking the time to give some great insights!  You can follow him on Twitter @LevellSanders